Probably the greatest experience of my life

My WWOOF experience in Japan has been probably the greatest experience of my life so far.
I will be ready for another wwoof in Japan.
(Italian WWOOFer in his 20s) 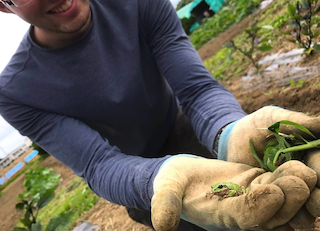 It was my first WWOOFing experience, and it was extraordinary.
My main aim was to meet Japanese people and speak Japanese language.
After one week, I was much more confident talking to people in Japanese.
The host was so well organized. It was a great joy for me being part of the host’s everyday life. I felt so much compassion and patience underlying in every moment I was there. Nobody is perfect. But this place shows how perfect a group of people can be when they are united with love. I learned a lot that I could never learn from a book or film. Living together with them gave me an opportunity to make observations from inside.
Every day I was doing different things to help. So I was learning new words and knowing new people and getting different instructions.
Kansha 感謝, ありがとうございます。
(Turkish WWOOFer in his 40s) 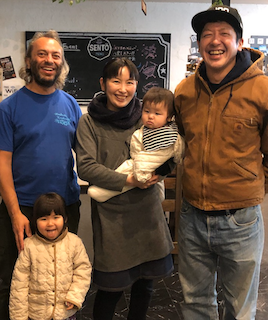 The home cooked food was AMAZING!

Very grateful for the time spent at G-farm. It was the perfect wwoofing experience and just thinking of it makes me want to go back to Japan already.

From the moment you enter, the hospitality the G-family showers on you make you feel at home instantly. The traditional Japanese house is fully functioning and spacious, with good facilities that exceeded my expectations, even as a city dweller. The home cooked food was nothing short of AMAZING and probably the most authentic food I've eaten in Japan!! Many ingredients were from farm-to-table and the freshness is unbeatable. Working on the farm did not feel like work at all, as I got to learn many things as G-san patiently answered all our questions. I enjoyed every moment of it! From feeding chickens, to tying up tomato plants and washing the plant trays at the paddy field. When we had some free time, I looked forward to cycling around this community in the evenings and just taking in the countryside or going to the food marts.
Arigato Gozaimasu.

(Singaporean WWOOFer in her 20s)

Okaasan and Otousan were very kind and welcoming

Okaasan and Otousan (you will call them this no matter how old you are!) were very kind and welcoming, and really made us feel part of the family. They cared for us extremely well, and allowed us to experience many aspects of Japanese culture. They always made sure we were comfortable and happy. We usually all worked together and never felt like they asked us to do something they were unwilling to do themselves. We had all meals and breaks together, and both the company and Okasan’s cooking were fantastic. Their house is very comfortable, and the farm is in beautiful surroundings. We had an incredible time, and are so pleased to have stayed with them. They were quick to reply to our messages which made organising our visit very easy.

It might also be helpful to have some idea of what we did. Every day we woke up at 7 to have breakfast at 7.30. We would do the washing up, then have free time until we started work at 9. We would then work until 11 when there would be a tea break of about 30 min, with coffee, tea, and biscuits. Then we would work until lunch at about 12.30. We would then work from about 2 to 2. when we had another tea break. We would return to work until about 4.30. We would then have free time until dinner at about 6, and free time in the evening after that. We had three cooked meals a day, all prepared by Okasan. She is an excellent cook, and prepared a wide variety of Japanese styles which we really enjoyed. She also served us very generous portions which we appreciated after a day on the farm!

On our first day we prepared vegetables for the market (cleaning, weighing and packaging vegetables), then helped Okaasan at the market (mostly smiling, and taking change because we didn’t speak much Japanese). We were then taken to an udon restaurant for lunch by the hosts, before being given free time to explore T town. In the evening we had an ocarina performance from Okaasan and her friends, and they let us have a go ourselves.

On the second day we were picking off bean pods from a heap of azuki bean plants ready for drying. Another WWOOFer who had stayed with the host family before joined us for two nights. We were then taken to their grandchild’s shichigosan ceremony. We picked more azuki when we got back and finished work at about 4.30.

On the third day we started with picking azuki beans, then brought over some more plants ready for picking later. Then we prepared daizu plants for drying. Then we threshed aburai. After lunch we were joined by another two WWOOFers who had also stayed with this host family before. We all dug gobo roots and taro together. After that we hung up the daizu to dry, and finished early because it had been a hard day’s work. We had a very special meal all together.

On the fourth day we had a day off, so could explore T town some more. We were still given breakfast and dinner if we wanted them.

On the fifth day we picked the last of the tomatoes in the morning, then started clearing the peppers and tomato plants from the polytunnels.

On the sixth day it was very cold in the morning, so we started inside picking out bad azuki beans from those which had been dried already. Once it warmed up, we spent the rest of the day clearing out the tomato plants from the poly tunnels, and spreading them over their rice paddy.

On our seventh and final day it was very cold in the morning again so we sorted some more azuki beans. When it warmed up we planted out one of the poly tunnels we had cleared previously with lettuce/cabbage. After that we cleaned more vegetables for the market, and ended with picking some more azuki beans. We had a very special farewell meal. We truly had a wonderful time.

(English WWOOFer in his 20s)

A Host photo from the Photo Gallery page